The incredible desert painting falls under the landscape category which is often assumed to be one of the most difficult masterpieces to portray. The artist often finds it a Herculean task to do impeccable justice with such wondrous artworks.

What makes it difficult? The answer: the choice of colors in accordance with Mother Nature itself is a very tough job. Additionally, the subjects that should be showcased in the desert painting should look very real for the work to be hailed as a masterpiece. Therefore, we’ve master-crafted a list of 5 magnificent desert paintings by world-famous artists.

A Dash for the Timber 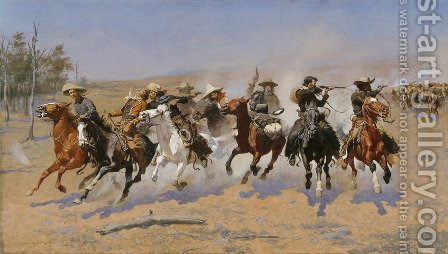 Often known as Frederic Remington’s first great painting, ”A Dash for the Timber” is one of the greatest desert paintings of all time. Commissioned by a wealthy New-York based industrialist, E.C. Converse, the painting made its first public appearance at The National Academy of Design in 1889.

Taking a glimpse at the painting, the first thing that draws the audience’s eyes is the fleeing horse riders galloping forward directly towards the viewer. The picture depicts cowboys in the southwest shooting at the Apaches chasing them in the rear.

In fact, one of the eight riders is already wounded but still remains on the horse with the aid of his fellow mate. The timber on the left looks thin, and the viewer wonders how much protection it will provide. Remington’s portrayal of horses and the scenery is absolutely revolutionary in this artwork. The horses that are running hard with bulged eyes, flaring nostrils and straining muscles make it look unquestionably real. 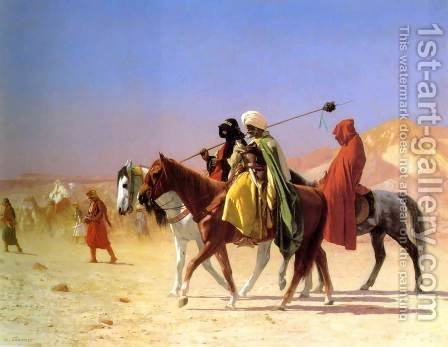 One of the most renowned painters during the Orientalism movement was Jean-Leon Gerome who had painted a countless number of works and ‘Arabs Crossing the Desert‘ is one of the famous artworks by him. This masterpiece was the result of his travel through the Middle East and Africa.

The foreground consists of three Arab men on horseback who appear to be slightly away from the group. There are other men, horses, and camels on an arid background blurred by the dust and heat. From the choice of colors for clothing to decorated bridles and harness on the horses, these exquisite details speak lengths about Gerome’s Orientalism interest.

Fight for the Water Hole 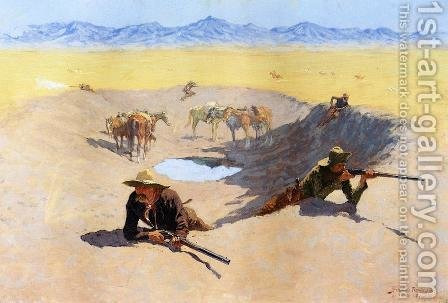 In this painting, the artist offers us an epic visualization of the fight for survival in the desert. In the painting, there are five cowboys with their horses hiding or rather protecting the water body behind them. The focused characters on the foreground are ready to rifle and repel the incoming attacks from their enemy who can be seen in the distant background.

That’s not all! The painting also shows a little water left on the lower area of the water body with the horses behind them. With the painting, the artist reminds the viewer how problematic the search for water can be in the desert with the scorching sun right above your head. 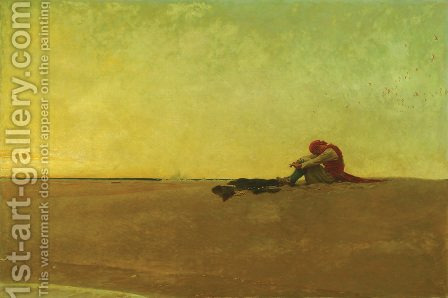 Marooned, painted by Howard Pyle in 1909 is one of the most tragic paintings ever made by the artist. The painting is currently put on a display at the Delaware Art Museum in Wilmington, Delaware, in the USA.

It is one of the artist’s most emotive pieces that depict a pirate who has been marooned. For many of us who are new to the term ” marooned,” it refers to the act of leaving someone in an inaccessible place like an island or the middle of the desert.

In fact, it is a common punishment for pirates who break the pirate codes. The individual is left with very little food, water, and a revolver to end their life when the hope is lost. The picture has done great justice in visualizing the emotion and pain arising due to the harsh tradition of being marooned.

An Arab and His Horse in the Desert 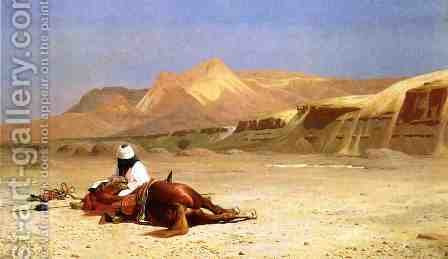 Currently in possession of private art collector, Jean-Leon Gerome’s ”An Arab and His Horse in the Desert” was painted in 1872. The artist has portrayed a very emotional moment between the man and his loyal companion.

The main focal point of the painting is the Arabic man cradling its horse’s head. It portrays not only a personal moment but also portrays a whole aspect of the culture. The painting showcases how important their horses or camels are to the tribes of the desert. They are highly dependent on their animals and put a great effort in maintaining and taking care of their animals, without which their survival is almost impossible.

These paintings immaculately portray the hardships that are faced in the expansive desert which many are unaware of. Browse some of the magnificent desert paintings and get wowed by the precise techniques and use of colors.