Whats New in the latest update of Samsung Gear S3

Samsung Gear is a series of Smartwatches manufactured by the South Korean company, Samsung Electronics. Samsung Gear S3 is the third of its name and series. The Gear S3 has a 1.3” super AMOLED display with a pixel resolution of 360 x 360. It also has Exynos 7270 Dual core processor and a 380 mAh Li-ion battery. Tizen is the operating system being used in the watches. It also has 4 GB internal memory, 768 MB RAM. It comes in two models: Classic and Frontier. It comes with a touchscreen interface also with a support of two buttons that can be used to navigate throughout the panel. There are a lot more features, but we wish to conclude them here.

Just in case, if you wonder it’s a whole lot of technology in a small watch; then let me tell you, it gets regular updates too, bringing a brand new lot of features to the already “Smart” watch. And one of the updates is the latest one. The latest update presents you the newer version of the operating system, Tizen i.e. Tizen v3.0.0.1. This update brings some premium features and some quality improvements to the existing ones. 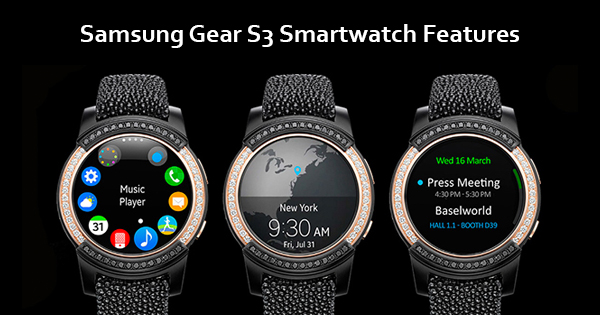 If you’ll see the update pop-up that shows up on your smartphone, the update includes the following:

Besides these, there are a lot more features to consider like “Clear all” option to clear all your notifications. Moreover, now you can browse and download any compatible application from Galaxy Apps Store straight your watch. The exercising and health monitoring features also got some major improvements providing a real-time heart rate monitoring. Creating events with a bunch of detailed information, adding contacts to the address book directly from the watch is now supported.

The Samsung Gear S3 got the mixed response from the masses, majority love it. But the new update is yet to be tested and Samsung has put a lot of hopes in it. The Samsung desperately needs a major breakthrough in the global wearable market as it was ranked 5 in the top 5 spots of the global wearable market for Q3 2017, facing a massive defeat by Apple, Xiaomi, Fitbit, Huawei. Samsung only managed to ship one smartwatch for around 23 Galaxy flagship smartphones during the Quarter. So the Samsung made the present update which is highly expected to raise the market for Samsung.