You are here: Home / Entertainment / Alien: Covenant- Has Ridley Scott given us a good movie again? 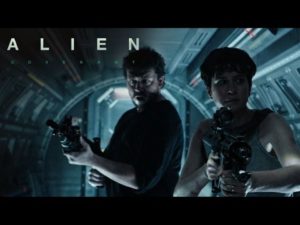 10 years after the Prometheus mission, a ship named the Covenant is sent to a distant planet with hops of populating it. On the way, the ship gets hit by a solar flare which disrupts operations but does not cause major damage. As the ship continues on its journey it comes across a signal that seems to be human from an uninhabited planet. The ship’s crew decides to land there. What happens on the planet forms the rest of the story.

With Alien: Covenant, Ridley Scott has not only sought to make a sequel to the movie Prometheus but has also tied the movie up to the original Alien movie. The movie is a true blue Sci-Fi horror film that redeems Prometheus’ faults. Critics disliked Prometheus for being too flashy while missing out on its goal of setting up a prequel to the original Alien movie. Covenant does this nicely and even turns out to be a sequel to Prometheus in the second half. The first half is mainly concerned with the inhabitants of the ship and their decision to land on the strange planet’s surface.

This movie wins in all the little details. With a star team of writers this movie proves to be a superb narrative with some truly scary scenes. The writers of Logan and Transcendence came together for the screen story. The movie also plays it safe when it comes to the horror segments by mashing up the previous alien movies. Covenant manages to strike the perfect balance between being a killing spree movie on an alien planet and a true Sci-Fi movie.

Unlike in Prometheus where the characters debated faith and reason constantly, this movie puts that on a side note and even cuts back on information about the Engineers. This helps the entire franchise in a way both as a sequel to Prometheus and a prequel to Ridley Scott’s original Alien movie. One thing to be noted about the movie is the rather somber take on the cinematography. This may seem like a bad thing but it is not so especially after the very flashy Prometheus movie. This allows the movie to focus on its real goal – being a horror/thriller with some Sci-Fi elements.