You are here: Home / Entertainment / King Arthur : Legend of the Sword 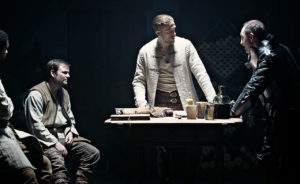 Young Arthur grows up not knowing who he is in this retelling of the classic. His uncle Vortigern seizes control of the crown after killing Arthur’s father. Arthur is led to Excalibur and pulls it out, claiming what is rightfully his. He embraces his destiny to become a leader.

In this latest retelling of the story of King Arthur, Guy Ritchie takes a leaf from his flashy crime stories to delve into something historic. King Arthur doesn’t seem as boring a retelling as the previous ones in the hands of the versatile director. The movie is action pack and full of scenes that will make leave you wanting more. The story never fails to impress and it is just one action scene after the other which is good. The movie establishes the purpose of Arthur and his claim on Excalibur in the beginning and sets off at a brisk pace from then on. Guy Ritchie has made justice to this classic and justifies the big budget adventure. The writers have also done a great job in keeping the story lively. King Arthur is a must watch in theatres. Comment down below after watching the movie.