You are here: Home / Environment / How Did The Dinosaurs Become Extinct?

The earth was once dominated by a giant species of reptilians that we know as dinosaurs. They ranged from the size of a hen to the size of 4 elephants put together. They were the Alpha predators and basically, earth was their turf. But 65 million years ago they were suddenly wiped out entirely from the earth. There are many theories which discuss what would have been the cause. Let’s see some of the most famous ones. 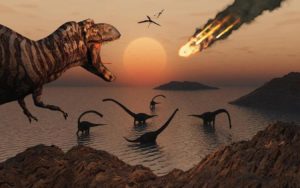 The asteroid theory states that a large asteroid struck Mexico which formed a 240 km wide crater. This impact sent the dust upwards into the atmosphere and completely blocked out the sun resulting in a nuclear winter. This nuclear winter killed plants, which in turn killed the herbivores dependent on plants for food and lastly the meat eater’s dependents on herbivores for food. But experts claim that reptiles like turtles, alligators and crocodiles would have also faced extinction this way. Some say that a freshwater, aquatic lifestyle reduced the threat. There are also arguments that the crater wasn’t large enough to have caused such devastation globally. 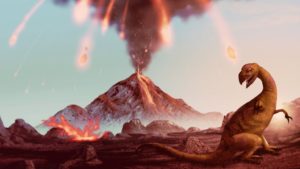 Some experts say there were series of huge volcanic eruptions which unleashed enormous quantities of atmospheric ash, which in turn blocked the sun, causing widespread climatic change and wiped out the dinosaurs. But this theory is debunked by scientists who claim that 65 million years ago there was a global fall in temperature and an eruption of such scale would have actually helped the earth to get warmer and be beneficial to the dinosaurs.

You may also like : Extinction – These animals are in Danger, We may not see in Future!

One theory suggests that maybe new emerging mammals would have started competing with the dinosaurs for food and space and would have ultimately driven them to extinction. Although this theory sounds valid but this is highly unlikely as Dinosaurs and mammals evolved during a similar time period and hence would have learnt to co-exist. Some theories suggest that mammals would have eaten their eggs and wiped them out. But then predators wiping out their prey is very unlikely. It is unwise to eradicate your food source – you wouldn’t last very long once it’s gone.

Towards the end of the cretaceous period species started migrating. This could have led to a disease spreading frenzy and could have wiped out the species not resistant to them. But this wouldn’t have wiped out every single species of dinosaur, and the argument fails to explain the disappearance of a multitude of species that lived in the sea.

A very severe ice age could have altered climates and frozen waters to the extent that dinosaurs were unable to weather the conditions, and slowly died out. This theory has long been discarded because scientists have not found any evidence of an ice age occurring during the life of the dinosaurs. 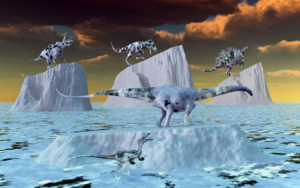 It’s speculated that maybe a comet would have travelled close to earth bringing radioactive debris that would have collided with our planet, disrupting weather patterns and wiping out the entire ecosystem. But we still do not have any evidence of extraterrestrial events happening during that era. Even the excavated remains show no radioactivity damage.

Although the reason for their extinction is still shrouded in mystery, scientists all over the world are teaming up and trying to find concrete answers. It’s just a matter of time when we will all come face to face with the real truth. Till then let’s ponder over the theories stated above. What do you think is the reason? Comment below:

You may also like : Dinosaur footprints found in Australia