You are here: Home / LOL / Dumb Criminals who deserved to get caught!

The world is not a stranger to crime. There is always some form of crime happening in all parts of the world. Some are truly heinous and ought to be punished severely. Others, however, are almost innocent in their stupidity. There are several stories about dumb criminals all over the world. Here is a collection of the dumbest criminals you will read about.

1. Don’t save your Drug dealer’s number

Police in Vancouver, Canada were looking for a suspect for drug possession. In the process of the investigation, they asked to search Jason Pauchay’s house. Jason was not a suspect at that time and the police were looking for someone else. However, one look at Jason’s phone gave it away. Jason had his name as “Jason Pauchay Drug Dealer” on his own cell phone. It is embarrassing saving your drug dealer’s number but your own number?? This man deserved to be arrested for his foolishness! 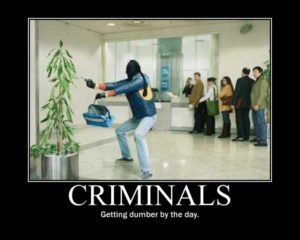 3. Two Cops and a Coffee

This criminal wanted to rob a coffee place. He proceeded to cut the line and threaten the cashier in front of two other men. The man demanded all the money from the till. The two men however quickly recovered and arrested the robber. Turns out, they were cops wearing full uniform. The robber failed to notice that in his hurry!

In Mesa, Arizona a criminal tried to enter the house through the bedroom window. He failed to notice the clothes hamper below the window and was caught in it. Needless to say, the robber was caught red handed as he could not escape till the cops came. Well, that was one robbery that went out of plan! 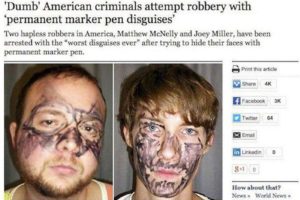 5. Ride together, Drink together

This woman in Fresno, California was stopped at a DUI checkpoint for being completely sloshed. She was so drunk that she told the cops about her husband who was also drunk. She said, “My husband’s right behind me, and he’s even drunker than I am.” These criminals are so dumb they deserve to be arrested!

6. Mail me your location

In Germany, a dumb criminal taunted cops that they had all the information about him wrong. He sent mails to the police department saying that they got his build, color and accent wrong. He also ridiculed them for saying he escaped on foot, he actually had a getaway car. However, the cops were smarter. They traced the IP address of the criminal and arrested him in a few hours.

7. The dumbest of them all

Last on our list is a repeated offender; so repeated that she had a GPS enabled ankle bracelet. This woman was arrested for breaking and entering. I think you understand where this leads to. The police easily proved that she had committed the crime by looking at the GPS location in the ankle bracelet. She was wearing the ankle bracelet given to her during probation from a previous crime! Whew! Thinking about these dumb criminals made me laugh. What about you? Comment down below.