You are here: Home / Technology / Apple’s newest employee: Steven Keating who printed his own brain tumor

Steven Keating who is a doctoral student from the Massachusetts Institute of Technology was recently diagnosed with a tumor in his brain. This, however, is not the interesting part. Steven then went on to map information about his brain and 3D print a model of the tumor inside his brain. This got him recognition from several scientists and companies in the field of medicine. Apple hired Steven Keating to be a part of their company as soon as they heard of his achievement. Since Steven Keating is a major in mechanical engineering, it is still not clear whether apple has hired him to be a part of their medical research team or other divisions which may augment his mechanical engineering capabilities.

Since the time he was diagnosed in 2015, Keating has been collecting data about his tumor and has been working on the experiment to print out his brain tumor. He has done this by collecting data from various sources inside and outside his brain. Till date, Keating has estimated that he has collected close to 75 GB worth of data from his brain. Almost all of this data corresponds to his tumor which is what helped him 3D print it. After Apple hired Keating on the basis of his expertise he appeared in a conference. In the Bionetworks’ annual conference, Steven addressed the public as an employee of Apple. This year the conference was held in Seattle. 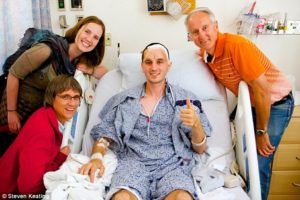 During the conference, as an employee of Apple, Keating talked about the difficulties he faced. The main difficulty Steven faced, after his diagnosis, was collecting the data about the status of his health. Patients everywhere were facing difficulty in aggregating their own medical data. Keating told the audience that he actually went to medical school for some time to learn about tissue structure. This was so that he could map his own medical data. There are speculations that Apple has hired Keating as part of a medical research team. This comes after Apple recently acquired a startup called Gliimpse which helps people aggregate their personal medical information. Steven’s work strongly correlates to the startup’s goal which is the basis for such speculation.

Bionetworks, which is where Steven gave his address, is a nonprofit research organization. It is a major part of the ResearchKit software designed by Apple to help medical researchers conduct studies more easily. ResearchKit helps in conducting mobile-based studies which make it easier for researchers to compile data. It has also been rumored to be working on a secret project. The project aims at developing sensors that can continuously monitor blood sugar levels to treat diabetes. The sensors are non-invasive which means they can be fitted to a part of some Apple products like the Apple watch.